randomjunk's site   weblog   profile   gallery   reading   guestbook
Memores acti prudentes futuri
It's easier to complain
but there is beauty in the mundane
What am I staring at now?

What a horrible dream... and then a weird one

Muffy is going to have to read this sometime
I'm keeping a record of this conversation.

Um.... I ate some chocolate chip banana bread for breakfast... I warmed it up and the chocolate was all melty. :D

You know that feeling when you've lost a tooth and there's the empty space and the gum there feels all funny and like... tender? Yeah... it feels kinda like that in the back of my mouth where that damn wisdom tooth is ripping its way out of my gums. Except it hurts and kinda tastes like blood sometimes. :/

Cthulhu in a jar. Convenient. :P 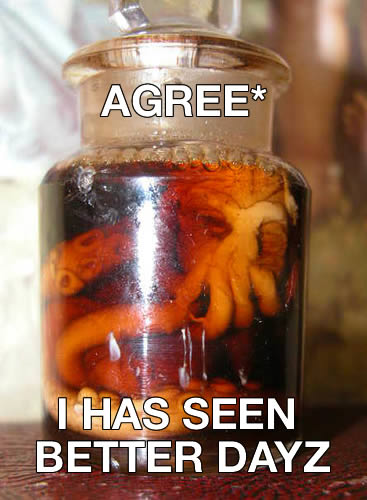 
I'm astounded by his astuteness
(The title drips with sarcasm)

Yesterday I found a bag of toast on the floor of my brother's room. 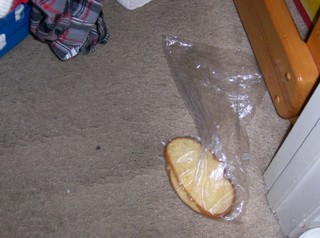 I was thinking about the word 'calcitrant' yesterday. I wrote it down so I wouldn't forget it.

Guess which part my brother wrote.

Today was a bit longer. Two hours and fifty minutes.

Last night I hardly slept. My arms were burning with this itch and I had no idea where it had come from. I ended up putting an icepack in my pillowcase and wrapping my arms around it... didn't work that well though. :/

I can't beat the lihc in KoL and it's severely frustrating me. >:(

Two hours and ten minutes of school
Yes, that was what I had to live through today.

My Lit. teacher gave me a science fiction book to read for my research project, since none of the ones on the list interested me. It's called The Left Hand of Darkness, by Ursula K. Le Guin.

Huh. Apparently, according to Wikipedia, it's feminist science fiction. :S

I'm having a bit of difficulty reading this book. Normally I encounter little to no difficulty in reading. This I guess, can be included in the "little" part of that statement.

She doesn't use... commas... a lot... I don't know. It makes it hard for me. But that's not quite it. Usually I can immediately picture everything I read. But not with this. It's just words on a page with some vague, not wholly formed imagery.

I didn't see Alice today at all. :0 I would've met her at her locker, like normal, but I was detained in the library, since they had to procure the aforementioned book for me. :/

Ah well. It's not like it's the end of the world. I suppose it would be if Angie suddenly lost all TV and internet access, though. :P She said that if that ever happened she'd probably kill herself. I guess books are no substitute for

(Sorry, I don't find this that funny. It was just the shortest clip I could find that was relevant)

What the hell kind of ad is this? :S

"Is Your Guy A Misogynist?
How To Tell If He Is A Woman Hater. The Latest Hot Topics!
LifeScript.com"