The good, the bad and the ones in the middle
Hey people, Merry Christmas!! I've came back earlier than I'm supposed to so I've decided to spend my day with you guys since I don't hang out with my friends anyway.. Let's just say that they don't ask me out and I dont ask them out too.. Anyway, let's start with, The good stuff:
I've read the book Twilight, twice.. yes, twice because it's been sometime since I've read something else other than the Charmed series and I had trouble remembering what happened when.. But I've learned lots of new words.. hahaha!! I've bought the hard-cover version of the book New Moon which costs me RM62 while the paper back version of Twilight for RM32. Well, don't be surprised, books here in Malaysia are expensive.. and most of us rather not read or read only books at the libraries. It's kind of hard to find good books at the library nowadays. Well, I love hard cover books because no matter how you read it, you won't get those lines at the side of the book like the paperback ones. That's why I rather spend twice to three times more for a hard cover book though the paperback ones are so much more cheaper and hard cover books are much easier to keep because you don't need to wrap them in the plastic so that the ends don't fold. I love to keep my books brand new. And sometimes I borrow books that I already have from the library so that I don't accidentally ruin my books. XD Well, I'm going to start reading New Moon and I can't wait for Eclipse to come out...Tell me when it's out and I'll start stalking the book stores and buy it even if I need to go to work for the money. Oh right, I bought the second last copies of Twilight and New Moon from Borders bookstore at Queens Bay Mall, since I can't find it at MPH or Popular in Gurney Plaza.. *jumps around in joy* Ying Sean got me Kyou Kara Maou OST as Christmas present from Taiwan.. Thanks a lot!! *hugs* Er.. hehe.. your present.. is on your way..

Next, The ones in the middle:
Well, my holiday was rather boring.. but thanks to Twilight, I stayed at home, stuck my ass to the couch and never got up till it's time to eat, bath and sleep.. by that time my ass is numb. I'd say.. since this book isn't made into a movie yet, I'm free to imagine how Edward look like.. haha unlike Harry Potter, I watched the movie before reading it so Harry's face is automatically Daniel Radcliff's. I hope, if they ever make this into a movie, they will chose the characters nicely as described in the book or else I'll damn to movie like what I did to Hana Kimi's Taiwanese series.. I still cringe in disgust whenever I remember about that. Well, I'm not a Christian therefore, Christmas is not a celebration for my family.. so it's kinda boring. The next festive season, I won't even have Estrella-chan around to keep my company. Er.. There aren't much Christmassy movies on TV this year, I wonder why.. The only place that feels like Christmas is really here is at the shopping malls. Nothing much are there actually since I've done shopping when I was at KL.. So walking around in shopping malls are boring. I'll be taking my drivers licence soon.. will be attending the course.. I've decided to perfect my English before venturing into other languages thought I'll be picking up a little Japanese from the animes I'll be watching. I wonder why aren't there Kyou Kara Maou anime DVDs even in Taiwan.

And now, The Bad:
Well, it's about my mom again. She now managed to get my grandmother to side her and do all those "you should go to college in January" talk. I mean WTF? You said it yourself that I should tell you if I don't agree with whatever you've planned so I've told you and yet you can't let go of it. So.. here goes the conversation

Me(telling my brother): You're lucky that you don't have someone forcing you to do things that you don't want to do.
Mom(looks up from sappy romance novel): Yet you get good results for everything I forced you to do.
-I ignored her and continued reading.-
Grandmother: Your friend isn't up here this time?
Me: Which friend?
Grandmother: The one who came and fetched you out the last time.
Me: Oh.. Estrella-chan? She's busy preparing for her National Service..
Mom: At least people are more polite than someone over there.
Me thinking: WTF? I didn't do anything to her..
Mom: Unlike someone who raises her voice to people older than her.. empty tin cans(the poor ones) makes most noise..
Me thinking: ... WTF is that for?
Grandmother(to my aunt's girlfriend): Yea, you never see those rich kids disrespecting their parents. Those poor kids are the ones making most noise.
Me(obviously can't take it anymore): You don't know my friends therefore stop comparing.(Stompped off while thinking, fine.. you want me to be like them don't you..)*started sending text messages to Estrella-chan*

-Next Morning-
Me: *Ignoring my mom while eating breakfast*
Mom: *looking for some reason I don't know why*
Me: *finished eating, washed the plate and sat down reading*
-Lunch time-
Me: Why are there anchovies in the soup?
Mom: Because there are no pork.
Me: .. Jeez.. *starts eating*
Mom: Just because I kept quiet, it doesn't mean someone can be disrespectful..
Me thinking: This is how Estrella-chan at home.. you can't even take it for a few hours and you ask me to be like her. You're lucky that I don't do things behind your back.. There are things you don't know and you'll never know. *Ignored mom, finished lunch and walked into aunty's room*

Well, that's pratically all for now.. Sorry, I just love to whine.. Now I wonder what am I going to do without Estrella-chan who's there almost all the time I need her. *sigh* I'll be off reading New Moon. Merry Christmas!!

Big Ass Huge Choc!
I'm quoting what she said a week before "I think I bought you a really big ass chocolate bar".
Max called as I was checking if I've really finished packing my things saying "you asleep? Bringing your choc over now." I was all, "OKay....!!!" You can imagine my eyes sparkling. 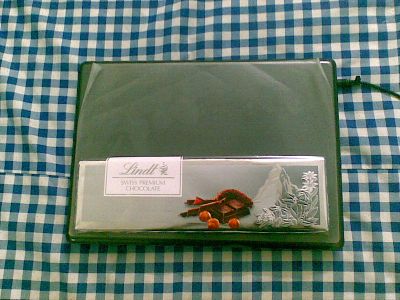 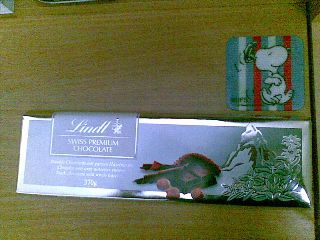 See how long this baby is?

Max said "I don't know how huge this is for you but this is huge enough for me."
It is the biggest chocolate bar I've ever seen and the largest ever owned by me!!

It's a Lindt Dark Chocolate with Hazelnut.
Love it so much!! Thank you!!!!!!!!
This is my new emergency supply cause I do not have the heart to open and eat it yet. It looks so perfect in its wrapper right now.

I'm very happy!
This morning, I wasn't feeling well because I had to make this decision about my high pay weekend job. It started when my uncle said that there are bad omens with the new job. It started with the "I don't know what I'm supposed to sell in that job" and then to the event which happened yesterday, the traning which got cancelled at the last minute. Called my mother and she agrees with my uncle but the decision is ultimately mine. My aunt says that they are not always right. They think that it was shady. So I went around asking some friends for their opinion.

It was just my luck when I was in the nearest mall earlier, I found out that Roots (I wanted to take advantage of the 80% off jeans but I guess I was too late) got replaced with Springfield and they are looking for part-timers only that the pay is nearly half of the previous one but we get EPF, which is like social security. I hope I do get the job with Springfield, I don't quite mind half of the pay. I am more excited to work for half the pay than the one with the higher pay.

I also got a really nice piece of advice which made my day. It is something which didn't end with "It is entirely up to you" Thank you so much!!! You know who you are! Thank you guys for listening too!

I am so gonna sleep really soundly tonight.