randomjunk's site   weblog   profile   gallery   reading   guestbook
Memores acti prudentes futuri
It's easier to complain
but there is beauty in the mundane
You're a cutie...
We went to the vet today. He was... interesting.

He kept calling my birdies "sweetie" and "kids". And he called Romeo "handsome". We found out that they're all okay, that Starburst just accidently pulled off a feather and lost some blood, and that Ducky will not grow back her feathers.

The vet also made a little joke... "I can see why you call him Romeo... he's got three girls!"

If you think about it that doesn't really work, because Romeo Montague was devoted to one girl; Juliet.

After the vet we went to An-Jan's Pet Food Supply (or whatever it's called) and got some birdseed, then stopped at Goodwill for a bit. I didn't find anything I wanted, but I took a few pictures. 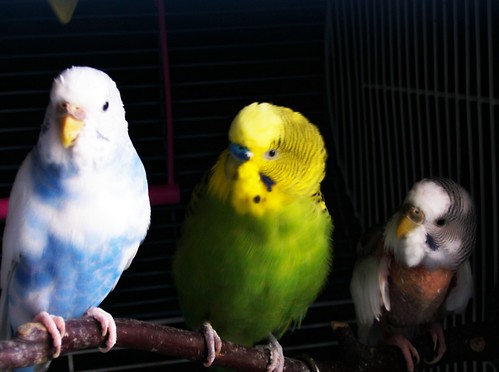 I would not wear these pajamas.

I wouldn't wear this either.

Some weird skirt thing I found.

Need I say anything?

Barf me OUT, gag me with a spoon!

Stupid internet
I wrote up a big post and then the internet went down. And I forgot to copy it. :/

My mom is reading Fast Food Nation and she's really into it... She keeps calling me over to show me the latest little interesting tidbit of information. Last thing was "McMerde"... did I know what that meant in french... I considered telling her that I did know, having looked it up sometime last year, but decided that would be a bad thing to say. I just told her I knew but we didn't learn it at school.

I've been watching Invader Zim... I'm kind of sad that they don't show it on Nick anymore. I mean, it used to scare me, but now I think it's kind of cool. I wish I could put the episodes on my iPod. For now all I have is YouTube.

Anybody know how to put DVD's on your iPod?

I appreciate Invader Zim and Gir and all, but this is a bit weird.