Bleh, my will power is next to nonexistant
I'm feeling either lazy or so apathetic that it completely controls my mind.

It seems to me that the current Top Active placeholder is not around enough to have surfed some two thousand pages. [I know I gripe about this a lot but it really really bothers me when people cheat on page surfing; for one, there's no benefit, and two, you don't get the feel of satisfaction unless you've actually surfed the pages normally]

They gave us nasty fruit snacks with hydrogenated coconut oil. (Yes, that's what I remember, aside from the other ingredients in it, which include beeswax, carnauba wax, ascorbic acid, and citric acid) The "goodies," as my STAR test room teacher calls them, were hard, chewy, and tasted like somebody crushed a bunch of cough drops and mashed them up with wax lips. I kid you not, that is exactly how they taste. Other descriptions included "vitamins," and "those lollipops you get from the doctor's office."

Alice went home at the end of lunch/beginning of sixth period. :/ She wasn't feeling well.

We learned about the Beatles in Music Genesis, watched a movie in Lit., and did some crappy polynomial division in Math. (Stupid Math)

I've got to make cookies for Marina. Initially I had thought about making something besides the chocolate ones, but I figured I shouldn't experiment because I could mess up and that would suck because it's for her birthday. :|

This entry is getting too long, and it's got no pictures. Sorry.


Stupid heater, or maybe stupid internet connection
Dammit! My dad put out the pilot light so we can't turn on the heater.

I have a little portable heater in my room, which I thought would work well next to my feet in here. (It's damn cold!)

Well, I forgot that when I bring the heater in here, the internet goes dead. Stupid internet. >:(

Math STAR test today was crappy. I basically forgot everything. EVERYTHING. And also there was some stuff I never learned. Like logarithms. And population standard deviation, whatever the hell that is.

I hate math. I hate it so much. Actually I just hate numbers. And math is included in numbers. Sometimes there are letters, I know, but they don't make words so they count too in the stuff I hate. (In other words I hate variables)

People who like math are all "Oh, it's great, there's only one answer!"

Yeah, that's one of the reasons I hate it. You see, because there's only one right answer, I have less of a chance of getting it right. >:|

They gave us kettlecorn for a snack. That was about the only good thing about the STAR test today.

I'm cold. :/ I don't know what "Grape Hatteras" has to do with North Carolina, but that's what was on the crayon in my state crayon box.

No pictures. Oh, and look who's conveniently in first place on the Active list again, even though she hasn't been around (at least I haven't seen her) for a while.

FOR OUR BIG BALLET EVENING IN BERLIN 2008 WE ARE LOOKING FOR SOME MORE BALLERINAS:.

IF YOU ARE A YOUNG (under 70) AND BEAUTIFUL OR UGLY... BALLERINA... CONTACT US HERE
[email protected]

So this is what Grapples are?

I wasn't going to include this but then I figured it didn't matter.

A few nights ago I had this really weird dream where I was talking a shower (that was the pretense, at least, the water wasn't on and the tub I was standing in was gigantic). So I was just standing there and suddenly a bunch of people ran in and jumped into the shower. And they were all fully clothed. And I wasn't. So I started screaming and trying to cover myself up (this is the first dream I've ever had where I was naked...) and then they all ran out.

It got into the cannister, and this time I saw it.

(Clickies for a bigger version) 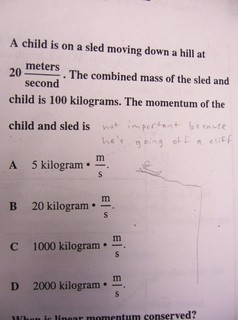 And now I have shoes for formal stuff. Not that I actually need them, I guess.

STAR testing was boring. I mean, I don't know how that's really surprising, but it was. And the school day was long but it felt short because we basically did nothing.

My STAR test room teacher has an English accent. :0

They give us a snack, and he asked us "Do you want your fish now or later?" but it sounded like "Duh ye wahnt yo fish na er lata?" :P

I need to make cookies on Wednesday because it was Marina's birthday today but I forgot. :(

I fail at pancakes

This title is void where prohibited