Formidable
I am out of my mind with work.

One proposal, one article, one project on the Martian winds. They all have to be ready by Friday.

I also have to prepare for my trip to Turkey, which is starting Saturday. I'm going to see some whirling dervishes. Go to a Turkish bathhouse. I'll be gone for two weeks. The last pieces are falling into place.... like today I told my boss that I'm leaving ("Great! French people fully support vacations!" he said) and tomorrow I'm getting my French residency papers sorted out so that I'll be able to come back.

Here is a sweet song that I'm into right now:

Beginnings of Stories
Today is the Ministry Fair and I'm supposed to promote the Writers' Club. The Writers' Club needs promoting since we currently only have three members, including me. Since I was doing this at the very last minute, I didn't have a lot of supplies--- so I went out a bought a bunch of fun-sized Lion bars (to draw the people in!) Lacking in flyers, I took what little paper I had and cut it into little strips. On one side I wrote the information about the Writers' Club, and on the other side I put "beginnings of stories" to stimulate the imaginations of potential members. Here are some of the random story beginnings I put on the papers...
(most of them I made up last night, but the starred lines are from famous novels, can you guess which ones?)

I can understand those who say they do not believe in ghosts, but they have never been in my house after midnight.

*Whether I shall turn out to be the hero of my own life, or whether that station will be held by anybody else, these pages must show.

I don't think of myself as a demanding housekeeper, but I draw the line at a walrus in the living room.

I must admit that "being kidnapped by aliens" had not been the first item on my summer to-do list.

It was not without a healthy helping of trepidation that I began my first voyage into the depths of the Congo.

If a man speaks a positive word about Seamus O'Donnell, I am obliged to conclude that he has never met him.

*It is a truth universally acknowledged, that a single man in possession of a good fortune, must be in want of a wife.

"It's called a flux capacitor."

I dropped the anvil off of the Eiffel Tower, with just enough horizontal velocity to clear the legs. Three down, two to go.

Today seems as good a day as any for a voyage to the Moon.

*Time is not a line but a dimension, like the dimensions of space.

For a woman the size of a thimble, a common house spider can be a formidable enemy.

The most difficult thing about living on Mars, is, for an Englishman, the deplorable paucity of decent tea.

*The was a boy called Eustace Clarence Scrubb, and he almost deserved it.

I awoke on the metro in a state of total disarray.

*All of this happened, more or less.

*Ships at a distance have every man's wish aboard.

*The moment one learns English, complications set in.

*Happy families are all alike; every unhappy family is unhappy in its own way.

It was a dark and stormy night...

When I received the plain, slim envelope among my bills and publicity flyers, there was no way I could have known that its contents would change my life forever.

I can't say that I would be good at being human, but I have always secretly wanted to give it a try.

*Someone must have slandered Josef K., for one morning, without having done anything truly wrong, he was arrested.

Those who think that unicorns are hard to find are clearly those who do not know where to look.

The capacity for flight has much less to do with the details of fluid mechanics than with the willful suspension of disbelief.

Like all of the most successful emperors in history, I was a fraud.

I had always supported the reintroduction of wolves, in the abstract.

Do not put aluminum foil in the microwave.

They had always said it could never be done, which was precisely why we had to do it.

You think the world is an orderly place, controlled by the clockwork laws of physics--- but you are wrong.

The summer of 2013 was one I would never forget--- the summer I lost my hand, my heart, and my husband.

*During the War of the Rebellion, a new and influential club was established in the city of Baltimore in the State of Maryland.

If the world really did have an edge, it would be in McMurdo Station, Antarctica.

They say that love comes when you are least looking for it-- which is why I had always remained on constant guard.

"Isn't it about time we buried your grandmother?" Grandfather said. I answered him the same way as always: "We'll have to wait 'til she's dead, Pawpaw."

Out of Time
Went to my church's "Religion and Science" seminar. The dinner that went along with it was... AMAZING. Especially the mashed potatoes.

The guy gave a seminar on the "8 or 9 myths of evolution", which sort of covered all of the problems that people have with evolution and how they aren't really problems at all. Many of them were sort of "in-field" arguments, like whether mass extinctions really did clear the field for the rise of the mammals or if the mammals were on the rise anyway, with the K-T mass extinction just speeding up the process. He was a kind of famous evolutionary paleontologist, having become famous through his work on the Burgess Shale. At the end were the typical questions you might expect, such as "As a Christian and an evolutionary biologist, how do you feel about Creationism being taught in schools?" and "You yourself are a Christian-- where do you see God in what you just said?"

His answer to the first was very direct (NO!) and the answer to the second was somewhat evasive and roundabout, in a very charming, English way. I made a couple comments which were well received, but which I don't have time to explain because I got a new Google Chrome app that limits my time on certain websites, and I only have 8 minutes left for all of Nutang, Facebook, 9gag, and YouTube combined, so I have to skedaddle.

I also planted the idea in M's head that, after the post-doc that he already decided he would like to do in America, he would then like to become a professor and live in America forever. bwahahaha. 6 minutes left. Crap. Goodbye Nutang.

The Curious Atheist
"Are you a believer?" W says, apropos of nothing.
We are sitting in le métro, occupying two bucket seats set four inches apart.

"Yeah," I say. For some reason it feels weird to say aloud.

"How does it feel?" he asks. The train arrives.

Nobody has ever asked me that question. From the look in his eye, it seems like an earnest one.

"I guess it feels... calm. Just... calm Peaceful. If I can take a Buddhist example, it makes me feel like a still pond of water. That my internal existential angst is calmed, making my internal water flat, so that it can more accurately reflect the world."

We get out of the train and onto the escalator. We move into talking about existentialism. W is the opposite of M. He brings out the pensive, Nutangian half of my persona.

W is the weirdest kind of atheist: a curious atheist. An atheist who wishes they knew what it felt like to believe in something.

In other news, my doctor told me that I should eat more vegetables, so I bought some carrots. Unfortunately you could only buy them by the bunch, so now I have 12 carrots.

In other other news, I went to church and hung out with my political debate soul twin. He's a great person to talk about politics with because he has lots of information, a good attitude, lots of respect, and a completely original viewpoint. We've been talking about settling down. I want a dog, he wants a record player. Ok, so we've been talking about settling down in the abstract. But whatever.

The Song She Sang So Beautifully
Tonight we went to an open mic night at the church. I heard a girl sing a beautiful rendition of "His Eye is On the Sparrow".

Whenever I hear people sing beautifully I invariably think the same thing:

One day she will be dead, and no one will remember how she sang so beautifully.

I read that about scientists, sometimes.

"He was a prolific scientist, and an accomplished banjo player."

"But now he's dead," I always think, "so all of the time he spent learning to play the banjo was wasted."

Maybe his banjo playing was what everybody loved about him, then, and nobody in his life could care less about his scientific writing. Now it is the opposite.

Bodhrán Power
To celebrate my new-found free time, I am learning to play the bodhrán. I bought the bodhrán at the end of my thesis, but I only got as far as some pretty inconsistent triplets before I had to move to France. Now, thanks to my parents carting a giant drum with them when they visited, I get to start playing it again.

It is going pretty well so far. No word yet from the neighbors. 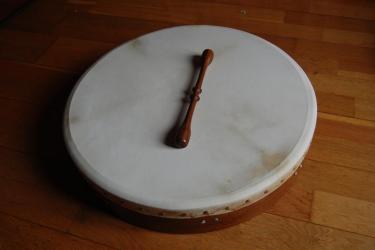 Tonight, sushi with the girls.

Five out of Five Experts Agree