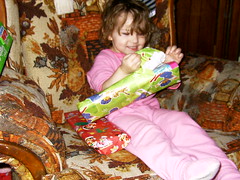 ... christmas came and went, I went after christmas sale shopping, I cried at work out of frustration, and almost quit.

As soon as my flickr page decides to load, I'm going to get a photo added to this entry.

I got a few things during the after christmas sales. On the 26th I got a make up set that was marked 1/2 off. So it was down to under $10 for this huge makeup kit. I liked the eye shadows they had in it. They have some neat color combinations. Today I went to the store and I picked up some christmas stationary that was still only 1/2 off and some shiny silver wrapping paper. I figured because it didn't have anything holiday specific on it, I could use it year round.

Wednesday at work my boss approached me and told me I need to work on getting faster. I told him I have been doing my best and going as fast as I can possibly go. Then he went on to tell me about how great the woman before me was and how she came in an half hour later than me and had no problem getting everything done by 9:30. I told him I understood and I doing my best. It was a little later when I started to cry.

It's very frustrating. I work my butt off. I do the best I can and I try to go as fast as humanly possible. Yet he had the nerve to compare me to a woman who wouldn't even show up to work. She wouldn't even bother to call in. She just stopped showing up. So I ended up being called in because she couldn't manage to show up to her job, but she is soooo great.

It made me very angry and I am still angry. I talked to my friend who got me the job about it, and she told me what he told her. I think she was surprised I didn't quit. But I told her that although I almost did quit, I decided not to because I want to keep the job. I like the job, even though my boss and his brother have really hurt my feelings and made me mad. The boss wants her to come in one night while I work and show me how to do everything because according to him I was trained "all wrong" and I'm doing everything completely wrong. And he said I'm too much of a perfectionist. Heather asked me about that, and I told her that I try to make sure things her perfect because I am sick of being told I'm doing everything wrong. The last thing I need is to be told I am not doing something good enough. It's one thing to be corrected, it's another to be told I'm doing a sloppy job.

Last night I went to freeheadset.org, and I ordered a free headset for my phone. It only cost me $4.74 shipping. You can even get a bluetooth headset at discount of you don't already own one. If you need a headset for your phone I recommend them so far. Of course I haven't gotten my headset yet, but I've heard about them on Rachael Ray and it was all good stuff I heard. I'll definitely mention it here when I receive it. The headset shown is the one I've selected to receive. That was one of 3 options I had for the Kyocera Marbl. The phone shown isn't the one I have, though. Mine is black. But that's the type of phone I have.

Let me see, I don't think their is anything else worth talking about so I'm going to end this here. I hope everyone has a great new year and I'll be back to write again as soon as I have time.