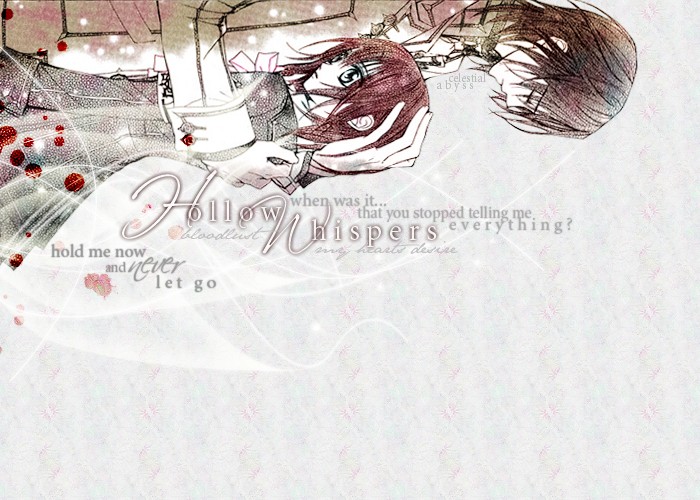 The Creator
Content by :: PuNiaoPuNiao Layout by :: Stephanie at
Celestial Abyss
Brushes found at ::
Celestial Abyss and
Feel
Texture and pattern found at Hybrid Genesis
My Name's Women
Initially, I don't really dig Ayumi Hamasaki's songs, much less anything about her. In a sense, she just looks too sweet and cute to be my favourite idol. But after hearing news report of her going deaf in her of her ear, I felt really sad for her. Simply said, listening and hearing is very important to an artiste who happens to be a high profile celebrity, espeically in a dog-eat-dog world in Japan. It's either you work extra hard or you simply don't try at all. A couple of months back, I saw her MV (Don't) Leave Me Alone and I really had to say it was bloody awesome, despite reoprts and naysayers saying that she ripped off her hairstyle from Posh Spice. And today, I was looking for some of her old MVs to watch, and after typing many variations of her name and some song titles, I chanced upon this PV titled My Name's Women.

Check out the lyrics:

After browsing around the Net and finding out the meaning of the lyrics, I think I begin to understand more about her My Name's Women PV. In the PV itself, it shows this surrounding which I believe to be a Gigolo Pub. And as you know, women who have too much money to spare will normally patronise gigolo pubs whereby spending money to have men fawn over them. This is actually quite sad that we women have to think of "using" this method to get men to look at us. Back to the PV itself, All this men inside are fawning over all the female customers, save for Ayumi's character who happens to look really dorky and geeky. And when one of the men decided to pay a little attention to Ayumi, that men just simply walked away again, real fast. Dejected, Ayumi's character walked out of the pub but not before long. Ayumi came back with a bang and somehow managed to "control" the entire gigolo pub's female clientele into rooting for her and all the gigolos were left literally crawling at her feet. In short, if you dissect the lyrics, it will mean something like this:

Girls like glittery and pretty things, whether be they young or old. But yet, this world somehow seems to evolve into a way whereby liking glittery and pretty things are forwned upon. Instead, women are not supposed to be like that anymore. Instead, women have to be diplomatically strong and emotionless and also pretend to be cool when in fact they should just simply be themselves, which is the real them in the first place.

In the past, women whether young or old cry when they are sad, feeling sad, helpless. But now, tears simply meant that it is a woman's way of getting what they want. Despite the fact that centuries and a millennium have passed, it doesn't changed the fact that tears are still considered a woman's tears. Is it really a crime to just let the tears flow when we feel sad, angry and dejected and couldn't take it anymore. Instead, when something bad happened - and it have to be something that's really bad - women are supposed to swallow their tears and their pride and pretend that nothing can hurt them at all. Really, tears are just a simple form of emotion for us women. Now, women have learnt to take it in their stride not to show their emotions anymore. Crying and tears would only make you look weaker than anything else.

Women are not prostitutes nor whores always dressing sexily, just to get attention from men. Sometimes, women are just simply women. It's just that simple to understand. Whenever women feel happy or just hanging out with their girlfriends for a night out, they dress to suit their moods, for the atmosphere and for the fact that they are acknowledging womenhood. There's nothing to be ashamed of, just by dressing sexily. And moreover, women are not like Barbie dolls who only like dressing up as if they are going to paint the town red.

Everyone has a weak side that they don't want anyone to see. Women alike too. We can have happy days, we can have bad hair days, we can have sad days too. But in this modern day society, women are simply not allowed to show their weak sides. It's almost like what the lyrics might indirectly suggest that "we exist to be convenient for men". No one is born to exist for someone else's convenience, not even animals too.

As the old saying goes, sufferings will only make a person stronger. Whack me if I'm wrong, but I totally agree. That with more sufferings and life experiences, one will definitely be stronger and live life better than before, determined not to make the same mistakes again. Without sufferings, one can never be considered a person who has lived.

Everyone can think they are controlling the whole situation just by doing the "I have everything under control" look, but who can really do it with gusto at all? No one, I suppose. Life takes unexpected twists and turns and noody can predict the outcome of what is going to happen next. You can be enjoying life to the fullest when everything can come crashing down for you. No one have the right to control anything for anyone at all. Fate and destiny lies within your own hands and only you can determined which path it is going to take, depending on what you are going to do with it. And as the lyrics suggests "We are not dolls who are only dreaming". yes, everyone has a few fantasies every now and then, sometimes you can wish you were one of the rich and famous or some super popstar living it up. But ultimately, there exists reality where one has to get real and think real and snap out of desires. Humans, regardless of race, language, religion or gender, can never live in dreams forever.

Back to the feminist part, women knew anything and everything whenever men are up to something. Call it the sixth sense, women can sense betrayal and back-stabbing like no one else can. "Hell hath no fury like a woman scorned" describe this last song stanza very well. You can do what you want or what you think you want, but try taking a leaf from this Chinese saying "Remember to wipe your mouth after eating the fish that you stole."

I know I might sound quite scrambled in this post, but still, ultimately, My Name's Women is a wicked good song and I really urged people, regardless of whether you are a man or a woman to give this song a chance.

All these actually happened when I was still in Secondary school (aged 13 to 17 years) and seriously, I really have no idea was it real or was it simply my imagination. When I sleep at night, I always encountered spooky encounters, like the more "popular" ąíŃą. It simply meant that there are mischievious spirits that goes around paralysing hapless humans who are alseep at night. In Western society, it's referred as 'Nightmare' and it is deifnitely not a very good experience at all. Imagine sleeping soundly at night and suddenly, lo and behold, you find yourself unable to toss and turn, and you can't even talk at all. The freaky part which I encountered was that when it happened (ąíŃą)Ł¬ I thought I heard something laughing cynically, like as if whatever that thing was knew that I was helpless to call out for help, much less move. So, I had to endure a full agonising 15 minutes paralysed. But the next few times which I encountered it again, I was a little prepared. I sort of realised that it only happened when I sleep with my palms opened and facing the ceiling, it's almost like a "link" to my body. And if that's not enough, I got to be entertained by moving furnitures in the dead of the night. And again, it only happened when I was the only one in the house not dead asleep. Sigh... Even sleeping was getting torturous for me during my school days. Weird part was that, it started suddenly and it went away suddenly too. Like as if everything never happened at all. Freaky, right??

See This Suggestion...
Next time when someone keep pestering you for a christmas present shamelessly, this is what you can tell or show them:

You see that box on th left of this post titled Navigation? Any ideas or suggestions what I should change it into? Besides, I'm blogging in Nutang and not Xanga, so I wanted to do something about it and changed it to something interesting for readers who stumbled upon my blog. Maybe I should do a list of the current manga or anime titles that I am "discovering" at the moment? Or maybe a wish list of anime/manga OSTs which I consider a must-buy? Come on, give me some ideas and suggestions..

Born in the cusp of 2003, the members of The Leaven Trait have come together for the sheer enjoyment of playing music with good friends and sharing it with the masses. The quartet will play where ever they can, when ever they can; all in the pursuit of musical excellence and what the band brands as 'punk deus ex machina.

The band has been touring relentlessly all over the tiny island of Singapore, invading institutions such as Temasek Junior College, Paya Lebar Methodist Girls School, Anderson Junior College, National University of Singapore and Ngee Ann Polytechnic. The Leaven Trait had the honour to perform at the 1st Annual Skydiving Festival in Singapore in 2004, as well as showcasing their mettle at The Esplanades Bayside Countdown 2006. Aside from local entertainment hotspots, they have made enough noise across the causeway from Malacca to Kuala Lumpur, spawning new friendships and bringing their high octane brand of punk rock along for the ride.

Surf by www.leaventrait.net for more information on the band. Alternatively, catch them live in action at one of their many stops in the local circuit.

What would you do if you ever encountered this kind of ATM machine?? Just watch and find out!!