The Welshman just brought me a completely unsolicited hot chocolate, just the way I like it, from Starbucks.

The Ghost and the Darkness
Best picture of my friends ever:

It came around to my neighbor. She was a few years older than me, but not by much.

"I'm going on a picnic and I'm bringing a Condom!" she said, smiling evilly.

A condom... hmmm, my third-grade-self thought. That must be short for "Condominium". Why did she look so satisfied with herself? A condominium was a ridiculous thing to bring on a picnic. You couldn't carry it, or eat it. Perhaps she was being intentionally absurd, and that's why she found the whole thing so funny. Nobody else seemed to get the joke, and the game continued.

Given that I skipped out on most of sex-ed in 5th grade by "accidentally forgetting" to get my permission slip signed, and I spent health class in 8th grade staging fights between a Hotwheels Camaro and a Prince Phillip figurine just under the desk for the benefit of my table-mates, it wasn't until I finally fulfilled the high school health class requirement the last semester of my senior year that the word "condom" once more made its way into my vocabulary.

It was much longer after that that I finally made the connection between it and the game we played that day in the backyard, and the condominium conundrum was finally resolved in my brain.

Children I should have kidnapped, Part I
We arrived at the train station. It looked like a scene out of an adventure film. People were bustling about busily, dressed in a mix of exotic and familiar clothing. The architecture was colonial, and the train itself looked like it was last one the British left when independence came in in 1947. Large, dusty sacks were piled against the walls. Someone had relieved himself on the platform, and the stinking pile of feces had become an uncharacteristic void space in the otherwise crowded pattern of milling people.

Once at our designated platform, we encountered some beggar children who asked us for candies and pens. We hadn't been expecting to have any downtime on the journey so we hadn't come prepared. A few people had tiny shampoo bottles from the last hotels we had stayed in back in Vietnam. One person had some hand sanitizer, and another a few Starburst. I gave a Starburst to one of the smaller children. He put it straight in his mouth without unwrapping it. We made him spit it back out into my hand and we showed him how to unwrap it. Logic, only seconds behind action, asked for the hand sanitizer to clean the resulting saliva from my hands. We unwrapped some more for the others until they were all gone. Next they wanted to know what the hand sanitizer was. A girl poured a little in a child's hand and it went straight into his mouth. She let out a cry and he sheepishly brought his hands down from his face. She showed him how when you rubbed your hands together quickly the hand sanitizer made them feel cool and tingly. Soon all of the children wanted to try it and we were passing out hand sanitizer right and left to a great many hands that may have never been clean.

The older girls all had baby siblings that they carried, and were a little shy. Two young boys were the oldest in the group and one was sweet and mild mannered while the other was mischevious and pushy. We naturally favored the sweet one and someone decided to give him the shampoo. Fearing a repeat of earlier occurrences, she pantomimed what one does with shampoo. She gave it to him and he put it immediately into his dry hair, plastering it to the side unnaturally. The mischevious boy was jealous and he tried to grab the shampoo bottle from the other boy. A tussle ensued and the bottle fell off the platform onto the rails. Our boy jumped down after it, scattering a pack of large rats that was eating the trash and refuse that littered the rails. We watched tensely as our boy leaped between the rails and finally made it back onto the platform before the train came. He put the shampoo bottle in his breast pocket proudly, even though it was covered in shampoo and no longer had a lid. 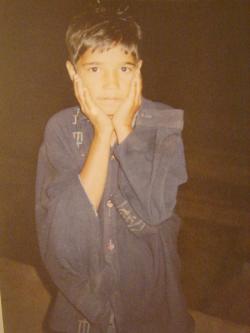 If I had had the means to raise him, I would have kidnapped him on the spot.


Whatever you say about India, the reverse is also true

Romantic Candlelit Dinner
Tonight my roommate and I had a romantic candlelight dinner in the backyard. We put little round white bulb-lights on the leafy green umbrella tree and lit the tiki torches I bought for $1.99 each. We hung my glass stars from the tree and lit the candles inside. Then we set out my red glass lanterns and lit the candles inside those, too. We put up the dark wood folding table and chairs in the grass under the umbrella tree and I made pink lemonade with ice cubes shaped like stars. I cooked up the fajitas with fresh peppers and onions that I'd made yesterday and Thalweg made beans and queso and rice and we ate it with sour cream on tortillas and tortilla chips. We looked lovingly upon our recently planted tomato plants in our new garden and pointed out constellations in the summer sky.

In college we always wanted to have a romantic dinner underneath that leafy canopy on the way to CMC- we even planned out all the details, down to having my singaporean roommate providing violin accompaniment. But we never did it, because we never had any one with whom we could romantically dine... it's a regret. It was a beautiful leafy bower, ripe for romantic dining. So I suppose here in Providence I can make up for this lost opportunity by having romantic dinners at all times for all sorts of different kinds of people. Still, my city begs to be enjoyed by lovers.

The End of Times

And it's freezing in the Seafloor Lab. So the fact that I forgot my jacket on this most sweltering of days will plague me throughout the working hours.

The only other place I can think of where such hot and cold extremes can exist in close proximity is... Mercury.