randomjunk's site   weblog   profile   gallery   reading   guestbook
Memores acti prudentes futuri
Shown to the place you fold
there's nothing to be without it
Gah, failure!
Well, I made those cinnamon buns.

Since I altered the original recipe, I don't know what I was expecting, but what came out of the oven tasted like biscuits.

Granted, they were good, cinnamon biscuits, but biscuits nonetheless.

And cinnamon buns aren't supposed to taste like biscuits.

I'm pretty sure this would not have happened if I'd stuck to the recipe and used all purpose flour instead of one cup whole wheat flour, one cup protein powder, and a half cup of all purpose flour.

I also used heavy cream instead of buttermilk. (Heh, not really a good substitute there) In the process explanation they said a recipe they took from used heavy cream, but they replaced it with buttermilk and added half a teaspoon of baking soda to balance it, so I figured it couldn't do much harm to just go with what they had before.

Ah well. It's not that the finished product tastes bad, it's just that it's biscuits.

Unbaked in the pan. 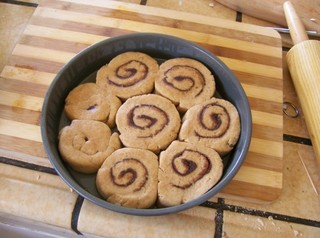 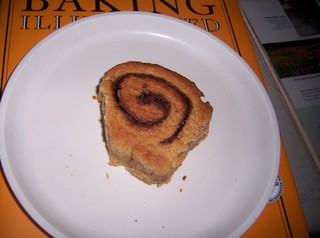 Whenever I see this couple pose, with the guy behind the girl, he ALWAYS looks creepy. Plus here, he appears to be wearing a diaper with a feather duster attatched on his head.

I'm addicted to these fruit bar things we got from Target yesterday. There's only one left (out of six) and I have to save it for my mom. :( I hope they get more soon.

Dunno what the high was, but it was at least 90 degrees outside today. Crazy stuff. Just a few days ago it was cold...

I'm not sure what to write about...

Planning on making cinnamon buns sometime in the near future. No glaze. I don't need extra sweetness...

Um... Yeah. Nothing else I can think of. Short post.

Baby doll is on her trapeze

So maybe I don't have that specific picture (yet)
I have those other pictures I may or may not have promised earlier. 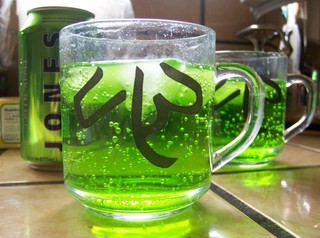 Mushy banana bread that I didn't want to eat. Alice shook it up in the container and it turned into balls! 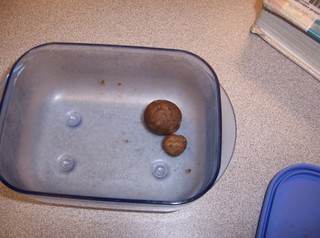 She was looking at it and was like "what the hell?" Then she took off the lid and we saw the balls and all burst out laughing for some strange reason beyond my comprehension.

No pictures of my new shirt. My apologies.

Lil Sis's expression is so great in this one.

Clive Barker is working on the third Abarat.

There will most likely be more Edge Chronicles books soon. (I've read them all so far, and actually have all the hardbacks too) Perhaps I should just go out and buy The Lost Barkscrolls...

[I gave up on the Spiderwick Chronicles a while ago, didn't interest me enough and were not a very good value for their size]

Maybe I should just reread all of the series books I'm waiting on and hope it won't take too long for the next ones to come out. :/

I have the Silence of the Lambs to read, and Hannibal, but I want to get Red Dragon before I start that trilogy. (I say "trilogy" because Hannibal Rising sounds like a joke; it came out alongside the movie)

I have a couple of pictures but unfortunately I'm not using the front computer, so I can't upload them. :|

Ooh yay
I got my new Threadless tee. :D

Pictures when I wear it maybe?

Working on the paper. Gehhhh.

When you want to write something possessive about a person that includes their titles, how do you phrase it? "Bob, son of Rob, eater of many food's pet wombat Fluffy"? I just don't know...

Three fourths of a page to go! :D Basically I just need to add a personal evaluation and the thing is done. Yessss.

Now I have to do my math homework. :/

---Edit---
This narrator on the History Channel sounds so sarcastic.

"And they arrMarsesanzer to mm mmm mm..."

My house is really messy :S