And the answer is... up to interpretation
Writing some poetry. It's not very good. Too... disconnected.

The things I write about are detached. People are always saying you have to put some part of yourself in good poetry, truly great poetry. I don't really do that. It's like someone is just writing through me.

Aren't people usually supposed to have some sort of an idea about what they mean when they write something? :|

Commenting on the one I just showed her...

Varsha: it makes as much sense as a musical
Varsha: would people really be singing their problems?
Varsha: i don't think so
Varsha: but it works!

Bah. :/ I may post that one here, in a protected post, if anyone cares to read it. But only if you want to see it. There's no point otherwise.


Wawa!
I've been watching my cousin Nolan... he's two and a half. There's no 'terrible twos' going on here, he's a very well behaved kid. In a general sense, I mean.

He's got a thing for pretzels... And drool. He drools a lot.

Got a bunch of pictures of him and stuff. 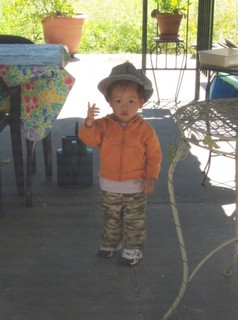 He found some old bird perches on the patio and was wandering around, holding them. 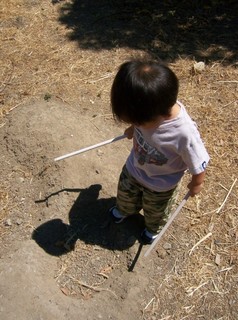 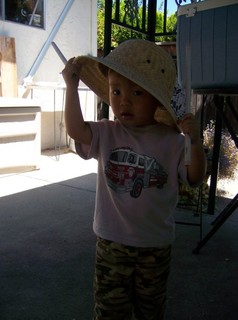 Probably a leftover from when I used to have my birthday parties at the Jungle. 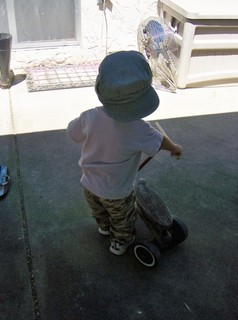 (He likes that one more) 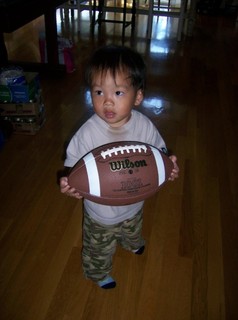 Not too great with the scooter. 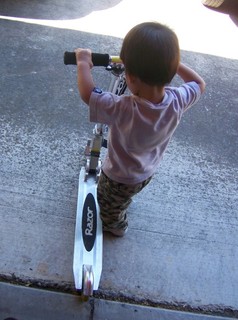 He very much enjoys washing cars with 'wawa'. 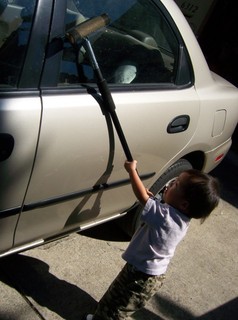 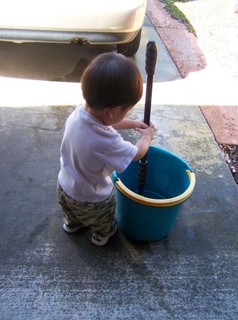 Child labor? No, of course not, what are you talking about? 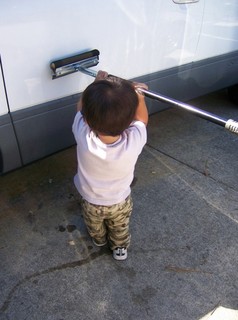 I took him to the playground (well, carried him there mostly) and we stayed there for an hour (two hours, according to my mom). Somehow some gum got onto my shoe so I was cleaning it off with some tanbark. He apparently found this very exciting, and watched me in awe. A few minutes later he got his own piece of tanbark and started picking at his shoe. It was really funny. :P 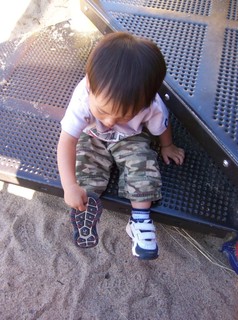 Whenever he sees a car he says something that sounds kind of like 'dada'. I'm not sure, exactly. The sight of motor vehicles is very interesting to him... As is the moon during the day; he kept pointing to it and saying "moon!"

And now, having carried him a lot and whatnot, I'm rather tired. I need to get back into shape...

My mom just told me that the school recommended I see a counselor. :S I have no memory of this, so she thinks I blocked it out. Yet I feel I would remember something like this.... I keep a paper journal, so if it happened within the last four years or so I would have a written record of it... but I don't see anything. I'M SO CONFUSED.

Ah, okay, we figured it out. My middle school recommended me in seventh grade, because I spent all my time in the library.

Adjectives and ramblings
I was thinking about clocks, and food, and adjectives. And then I started wondering.

How would you combine the three to make an understandable comment?

"This bagel is half past delicious."

"I disagree, I think it's a quarter to yummy."

"Why have you tasted my bagel?"

Oh, the conversations that go on in my head.

Sometimes there are things that need to be described, but you can't describe them with adjectives because they just don't cut it.

Romeo is being very fluffy today, but when I put it like that it sounds normal. No, I have to say "Romeo has a large fluffiness today," because it makes it sound more dramatic. Although it also kind of sounds like he has a tumor or something. But he doesn't.

That's just the risk you have to take though. Being misunderstood. Yep.

I have no idea what I'm talking about so I'm going to stop now.

I keep having this urge to say "Arghenblargh" for some reason.

Davey is so cute in this video. :D