It's getting cold again
And today it drizzled a tiny bit. Well, okay, more like sprinkled. Lightly. Hell, it was like a heavy mist.

I am trying to memorize the first five steps of muscle contraction, and I realized that I got it almost instantly after I drew it out. This is a great revelation for me, because now I know how to not fail Physio. Sometimes.

The first five steps in no words. 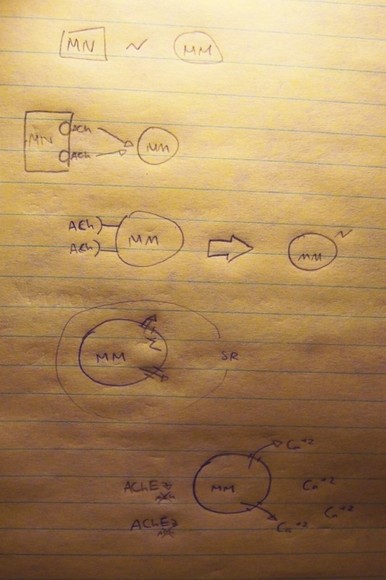 Getting a blood test tomorrow, so apparently I can't eat until that happens. So... no breakfast. I'm not sure how long this'll take. I really don't want to miss school... :/

[Sadly I don't want to miss being an Office Aid. The other classes... eh]

I drew this uh... cartoon on our Gov poster. I had to cut it out because he "wasn't sure if it was technically accurate" or something like that. I don't think he noticed that I stuck it on the wall. :P 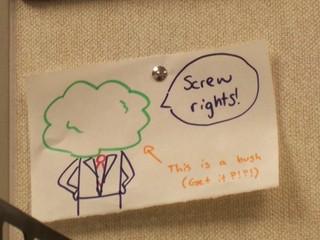 His head is a bush because I can't do caricatures. I took a class on them once, in seventh grade, but we never learned about that... it was straight cartoons with that woman.

My mom's letting me paint on a canvas. I've never done it before. I just felt like it earlier so she let me have one of the ones laying around and got out some paint. (Yep, we do indeed just have these things available)

I haven't started anything yet but I'll probably come up with something...

Okay now it's late and my mom wants/needs the computer. (This is why I haven't been on a lot in the past few days, if you noticed at all)


Stuff I've been up to
Lately I've been drawing walruses. Or... walri, walrupodes, whatever. Just in case I wasn't right, y'know. (Did you know that the plural of octopus is octopodes? I found that out recently)

And I tried Emergen-C and it was kind of unpleasant. But it's possible it made my bruises heal.

Here's a sneak peek at the reward comic I've been slacking off on: 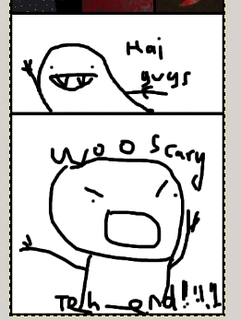 You can see where the epic part was overwhelmed by laziness.

Also you may have noticed that the uh... fanged ghost-thing is flipping someone off. That was unintentional.

Don't worry, I won't leave it like that. Probably.

Oh it turns out that I was wrong, and the Matchmaker forms are like normal. (Fill out, turn in, pay for results)

I was thinking (like I do all the time...) about stuff. Like if I had a stalker, how would they have found my blog. And would this person go to my school? Or just be an e-drifter? Would they carefully track all references of what I find attractive and then change themself to become what they think is something I would like?

OH did I tell you about my insanely brilliant or brilliantly insane idea for the prison system? I don't think so.

Okay so people who would get the DP or life in prison would be paralyzed from the neck down. Now, before you start screaming "cruel and unusual punishment," please consider that although it's unusual, it's not necessarily cruel. Well, not painful. I guess you could argue about that part.

Anyway, they're paralyzed. No more prison fights, no more suicides, no more escaping. (BUT, we will grant them death if they so choose after a certain period of time) Oh, and no more prison rape. You see why this is a good idea now?

We would of course give them attendants. And they would have a little self-sustained community, out of the way. Which would be protected against angry friends/family of the victims.

This would be in the future where we can unparalyze people, by the way. So it also solves the problem of killing innocent people.

I think there was more but it's more exciting to talk about when I'm face-to-face with the person I'm telling. Then I can make enthusiastic hand gestures and have a wild expression upon my visage. Fun!

Earlier today I watched part of this funny old movie called The Wonderful World of the Brothers Grimm. I'd like to see the whole thing sometime. :D