Appearance-wise
I probably look kind of like an emo hobo right now. Hurray!

As I did not go to school today, there isn't much for me to talk about here.

Why am I blogging then? Habit.

Dreams last night: the battle of worlds, carrying a kid around and talking to him, one more I don't remember.

For the battle one, it was weird. There was this long dark road that I was running on and there were all these other people darting around trying to avoid being killed. It was like there were... different arenas or something where people were getting slaughtered. But there was this safe zone that was a sunny yellow field of grass or something, and there was this fenced off patch where people could stay and not get killed. The patch kept shrinking though, and the field was huge but if you ran to the edge of it, into the dark forest, you could be taken. Somebody said it was a battle of worlds (not like the War of the Worlds, with aliens, we were just being picked off by some terrible supernatural forces or something).

The kid might've been part of that same dream, actually. I was carrying him around for a bit, trying to keep us both safe, and I guess we got out of the death zone. We went into this souvenir-shop looking place, which morphed into something like a grocery store, and debated about whether it was better than Target... And then we were in a house (the living room of which resembled mine) and I was looking through the fridge or something and then people were coming so I was trying to find this staircase... It was supposedly behind a TV, on this shelf, but unfortunately the dream got real-ish at that moment so it was just a shelf-box thing and there were no stairs.

I guess whatever was coming got us. Dunno though, 'cause I woke up.

The intro is a little long, but it's a good song.


Yesterday felt so long
I felt like yesterday was a whole weekend. It seemed like it was Saturday, and then Sunday, and when I was awake last night at 3 AM writing in my journal I felt like I had school the next day.

We filmed our skit today at one of my group members' houses. (This is for our Lit final) It was... interesting. We laughed a lot.

His house is really nice... I wish my house was like that... except that I asked for a drink of water and the glass smelled like old people, but whatever. Maybe they have hired help... I mean, the whole place was just super neat and tidy and stuff.

Came home (another group member dropped me off), ate a scone, my family left to eat dinner with my aunt's family, and I ate the rest of the chocolate sorbet (out of the carton!) and sat down at the computer.

Maybe I'll go for a walk or something again... dunno. Maybe I'll have an orange. Oranges are good.

I reread Crooked, finished it this morning. I think the last time I read it I was the same age as the main characters. :S

I guess nobody really wanted to comment on my last entry, save bananaface? 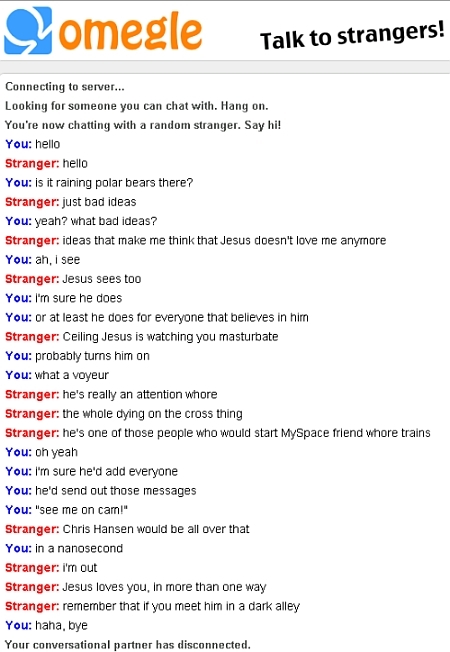 I think I had a nightmare

It Was A Lovely Affair

Nobody wants a book with random phrases
But if people ever want it in the future, I can help.

Decided to delete my previous entry 'cause it was basically just talking about how my underarm hurts like a MOFO (a crack smoking mofo? Nah, just a regular one) and all that fun shit.

So instead of that long cheerful complaint I give you this thing I just thought up while I was brushing my teeth: