It's the OP in me

This is what I made for her
I feel a bit bad because it's not super detailed, but she seemed to like it. And the vegan muffins, too... she said she ate four. :D 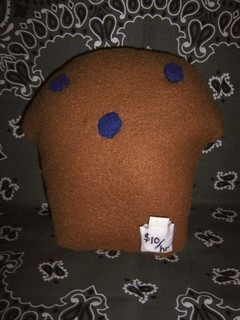 I'm just assuming she liked it all because she hugged me.

Last night I was stupid and I was on the computer until eleven or something and then I went and made Alice's gift and I stayed up until one. D:

Look, it's my mouse. 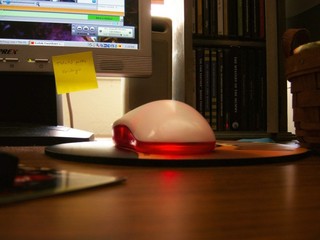 Well, this is the family computer so I guess it's the family's mouse, but you get the idea.

Jeez this is such a busy week. My grandma and uncle are coming today, and so is my aunt on my mom's side. (She's sleeping in my room... my mom didn't ask me, she just told me it was so :|)

And then my friend's graduation is on Saturday, I still need to re-film clips for the Lit final with my group, and I gotta get the other parts of my Lit final done. :0

(Shirt... and I was thinking maybe I'd make little head-shaped cookies or brownies or something and stick them on toothpicks. If you have no idea what I'm talking about because I forgot to say earlier, we have three parts [or four including a written test?] to our final, and for one of them you have to make food that relates to one of the works we've read this year.)

Lately there have been a lot of birds chirping throughout the night and we have no idea why... apparently none of my friends have any night chirping around their places of residence...

Blahhhh I am majorly sleepy right now. Maybe I will go and take a nap HEY WAIT THESE MEDICAL FORMS NEED TO BE FILLED OUT. See that's why I have Post-Its on my computer, 'cause they remind me to do stuff. Although I can't actually fill out any of the forms because I don't know if I've been vaccinated for blahblahblah disease or whatever.

So that gets defaulted to my dear parents. HA.