randomjunk's site   weblog   profile   gallery   reading   guestbook
Memores acti prudentes futuri
Just take a seat, they're always free
no surprise, no mystery
Some comeback
Angie: ok well
Angie: i'll probably leave now
Angie: i'll call you when i get to your house
Me: alright
Me: wait
Me: can't you just ring the doorbell
Angie: that would require getting out my car
Me: god you're so lazy Angie
Angie: and you're so sexy
Angie: bye 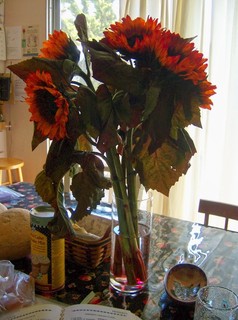 We went on an eight hour hike today. It's not necessarily SUPPOSED to take eight hours, but Lanipo can be pretty difficult. Slipped and skidded a lot because of mud.

Coming back was worse than going forward, I think. Getting to the top of the mountain wasn't easy or anything, but I didn't fall or get hurt. On the way back I fell on my knees into the mud and scratched my hands on some thorns. Nothing serious, but I could've done without all that.

The beginning of the trail is very rocky, so you have to climb boulders and such. It was HORRIBLE going back over that. The day had gotten hotter (we started at 7:40 AM, so it was cool at first) and the wind wasn't blowing. Alice had started back a bit recklessly from what I hear; she went fast but suffered for it by falling and getting some nasty scratches. She was quite far ahead of the rest of us (my mom, her friend, and her friend's brother-in-law), so I called her and asked her to wait at a bench that's near the beginning (before all the rocks).

I was so tired by the time I reached her.... man... I had to rest every few minutes and I felt like I was about to pass out. She seemed to have enough energy to trek onward, but I was panting and stopping constantly. X|

Anyway, we made it back to the car first, and rested for a bit. I'm definitely not hiking that again for at LEAST five years. (The last time I did it was when I was twelve or so... and I didn't finish because I twisted my ankle near the end)

My feet hurt so much right now... I have some pictures of our shoes before and after the hike. I'm going back home tomorrow so I can upload them then.

Shoes to ruin
We got some shoes from Payless today that we're going to use to hike on Lanipo. Alice and I got the same kind. :P

I'd show you pictures but... yeah... can't upload anything here. I'll be home in a couple days though, so I'll try to then.

My mom was out earlier today, and Alice and I were waiting around the house. We ended up watching some tecktonik videos. Remember that? My thing with tecktonik? Yeah well I never learned, but occasionally I'll watch a few videos. This one was new to me though...

Friday we're driving down to LA to pick up my grandma. I bought a shot glass for a friend (you'll get to see that too once I'm home) that I'm going to give to him while we're there. And... we're planning on hanging out some. Guess we'll see how that goes.

Oh also you know what WE FOUND NEURO LAST NIGHT YESSSS. It was pretty exciting for me. I got Bliss and Sleep. Alice got uh... the appetite-curbing one and a Bliss as well. Yum yum. Too bad I can't find them at home. I love interesting beverages. X|

I guess I'll go take pictures of random stuff now before I forget.

Out of state, out of mind
There's a gecko scampering around in here and it keeps clucking.

The clucking is kind of like really fast kiss noises.

Though not unpleasant, gecko clucks are not the most melodic of animal calls.
---

He keeps telling me he wants to drive his car off the road and crash into something. It worries me.

Then he says that if he lives I can come and visit him in the hospital. He says that since I want to help someone, I can help him. I tell him that's not what I mean when I say I want to help.

I'm not convinced he's going to do anything but I'm still concerned.

I think I might be a terrible person for saying I wouldn't ride the train for ten hours by myself to go see him in the hospital if he got into a tragic accident.

My friends were right when they said I don't have a filter...

I should have kept quiet.
I said the wrong thing.
I think he's upset now.