One of my group members did essentially no work on her slides. We're presenting tomorrow and we had TWO WEEKS to do this.

My other group member did his, but I touched them up and did some editing. Besides his two slides, I had four of my own and three of the ones I did for the group member who procrastinated terribly.

I don't really care about dividing up the work equally. I just want to get an A. We're getting graded as a group, not individually, so I kind of had to do this.

-Sigh- She said she works until 11:30 PM. I can understand if she has limited time, but we had two weeks. Two whole weeks. To do this. Fourteen days. How could she not find the time to do what was like, probably half an hour of research and twenty minutes of typing and formatting? We didn't even have class (which is normally three hours long) last week. She could have done it during that time slot.

Luckily, in the other group presentation I have to do tomorrow for math, we didn't have anybody like that.

This is such a rant. I think I'm just annoyed because the last time we met (two weeks ago), she acted like she was the one who was going to be doing all the work. Like "don't mess this up for me guys, I need to get a good grade!" Not those exact words I mean, but that was the vibe I was getting.

Oh my god they have super long cuddly Ugly Dolls. 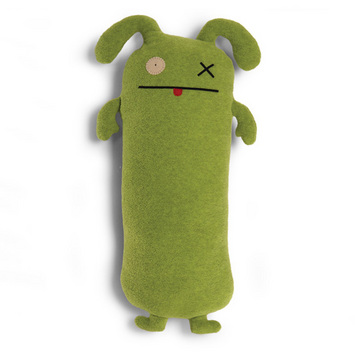 I wish they had the super jumbo size of OX too. I've always wanted a huge stuffed animal.

Listening to "Toxicity" by System of a Down.

I have mixed feelings about this song.

Kind of hard to understand him, so, for reference:
I've been a liar, and I've been a thief
And now I don't think that is what I want to be
I'll do anything you want any old time
Oh yeah

Don't have any money
(Pockets are empty)
Don't have any looks,
(He is a dog)
Just borrowed pianos
(He's coming over)
That I can't hardly play.
(To use what he wants to)
I may have a pen somewhere, staff paper to.
I'm asking for it.

You need some more brandy
(Got a pack of cigarettes)
You need cocaine
(Give me more drugs)
You're in self-destruct mode
(I'm self-destructing)
Maybe it's the pain
(And hurting all over)
I don't need anything,
(Don't need nobody)
I just need you
(Nobody else)
You and I
It's all so shameful
You and I... it's all... it's a shame
(You're just another fool)

This Is a Broadcast by The Dears on Grooveshark

Stress from the end of the quarter is getting to me. I dreamt I was taking an English test at school and we were required to bring in big books to write in/about. I brought this huge heavy tome of stories I hadn't read, but which had a few blank pages at the front I could write my essay in. The professor told us we would have about half a page for each story we had to write on, and there would be six. Then she gave us a list of stories we could write on for the first section, and I hadn't read any of them. I wondered desperately how she expected us to read all of them in such a short time. The only one in the first list that looked familiar was a story called "The Crow", which I don't think was about crows at all, but instead a man trying to make sense of a tragedy that had happened to him.

By the time I had worked out what I was going to say, the professor was moving onto the next section of the test. Frustrated and unsure of what to do, I went outside into a shady garden that merged into some woods.

It was a very nice garden. There weren't really organized plants of any sort, just mossy mounds and trees and tiled paths leading off in different directions. The paths all connected at the center around an empty pond.

I wanted to stay there for longer but I had to go back to finish the test I was sure I was going to fail.

Diapers
I changed a baby for the first time today. You'd think, considering I've been working in a nursery for several months, that I'd have done it already by now, but nope, this was the first time.

So... that was something.

One of the babies that was being held by another nursery worker reached in my general direction today, and my coworker (feels weird calling her that) took that to mean the baby would rather be held by me. Well, I took him, and then he grabbed his cuddly blanket-frog thing out of his diaper bag. So... I don't know if he actually wanted to be held by me or he just wanted his frog.

I've been watching the gradual deterioration of a squirrel corpse on my bike route. It was fresh a few days ago, hardly looked like a car hit it at all. Now it's flattened and the head is gone and there are red innards protruding from the body.

I always feel sad when I see dead animals on the road. I wonder if the person who hit that squirrel even noticed.


Orgasmium
"Orgasmium is a homogeneous substance with limited consciousness, which is in a constant state of supreme bliss. An AI programmed to "maximize happiness" might simply tile the universe with orgasmium. Some who believe this consider it a good thing; others do not. Those who do not, use its undesirability to argue that not all terminal values reduce to "happiness" or some simple analogue."

Should happiness be our ultimate goal?

I haven't thought so for a long time. It's not one of my personal goals, at least.

This is just an interesting reason to back up how I've felt.