The background info and notes are nearly as long as the story itself, haha.

Alice saw that I was working on it while I sat in her poetry class Monday. She asked if she could read it once it's done.

You know, even though I have no qualms about sharing it with my writing group or even people on Nutang, I feel weird about letting her read it.

Even though I haven't written that much of it, it feels like this oddly personal thing that I want to hide from her. Maybe it's just because I'm afraid she would question what the story says about me personally? Obviously some of my viewpoints are manifested through it, but I'm not writing the main character as some sort of stand-in for myself.

I have similar feelings about my poetry. I don't tend to share it with people I know "in real life"-- it just seems like it would... compromise my persona?

Lots of ideas floating around right now for the story. It is 2:12 AM though and I think this is not the best time to work on it too much. 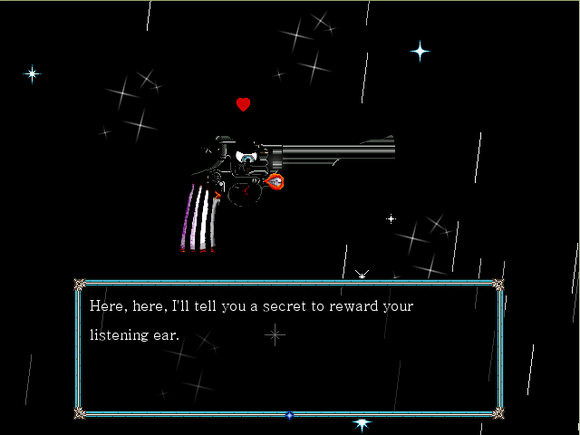 
Walt Disney, ughhh
I went to the Walt Disney Family Museum up in San Francisco with my mom today. It was basically Walt Disney's biography tacked all over the walls with some pictures, animations, and figurines here and there.

Usually I like museums, but this one was rather boring for me. I'm not really into biographies, especially not ones that cover seventeen rooms.

The animation techniques interested me though, so it wasn't an entirely dull experience.

Saw Oz: The Great and Powerful with my boyfriend last night. It wasn't a very good movie except for James Franco's hilarious expressions as a sleazy conman character. I mean, I wasn't expecting greatness, but this movie felt very flat to me. I think they could have shown more of the Oz environment. What they did show was nice, and I liked that, but mostly it was like, flowers and plants. There were... that I recall, three or four animal species shown.

One of my favorite parts of the Oz books has always been the plants and animals of Oz, like the tree that grows lunch pails. They don't really make sense in any logical way but they're exactly what the characters need and I always liked that. I feel like I've never seen an Oz movie that did true justice to the environment of Oz.

Does this picture make you feel uncomfortable? It makes me feel uncomfortable.

Back in the Wild by Greenskeepers.

Movin' on up
I have been on the Spongebob 3D film moving ride thingy at Great America (I don't know what they're actually called, but it's that kind of ride where you watch a movie and the seats move and stuff) and waited in line for it enough times that the video they show you while you wait is burned into my memory.

Basically it's just a badly rendered 3D Spongebob standing in line and reminiscing about his life. Every time he gets to go forward in the line he says "movin' on up!" and this fish behind him gets increasingly irritated.

My boyfriend has been getting all sorts of job offers recently since he made a LinkedIn profile, so every time I think about how well he's doing that Spongebob voice pops into my head and says that.

He had an interview with Facebook today that he doesn't think he passed, but he didn't expect to. I think he's also got a couple more interviews to do with Chegg (he got through the first one already). He's valuable to his current company, so his boss said that he'll match an offer if my boyfriend gets like... an offer letter, and even if there's no letter, they're still going to raise his salary by 15%.

He says that if he goes to work for Chegg he'll take me on another trip after New York. I'm getting so spoiledddddddddddddddddd. Heehee. 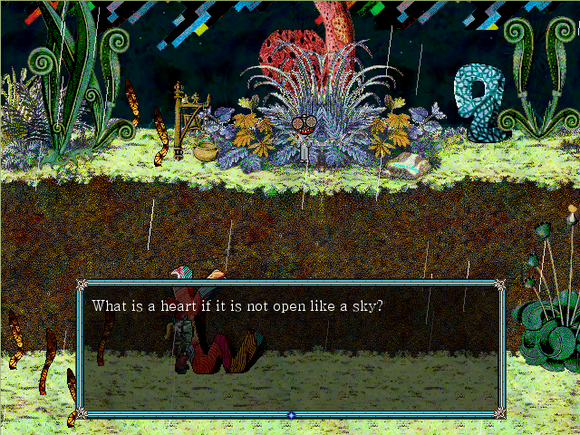 "Struggle" is a really funny word when you look at it.

Matchmaking
I had a dream that I was waiting in a car with Unicornasaurus while my boyfriend ran an errand. It was kind of hot in there, so we got out and were waiting around, and this guy I sort of knew from school walked up and said hi. We chatted with him for a bit and it turned out he and Unicorn had a lot in common. I only really remember them being excited to find out they were both into cars and French.

It got closer to when my boyfriend was supposed to be back, so I went to sit in the car again, but Unicornasaurus was gone. I exited the car again and walked over to a different car in the lot and found her inside. She said she was going to go with the guy from school to hang out, because they'd hit it off so well.

He seemed like a pretty nice dude, so I nodded and went back to wait by myself. Secretly, I was pleased that they liked each other, because I had always wanted to set up two of my friends.

Not related to anything else but here is a song I like. "Vagabond" by Greenskeepers.

Chegg freebie
So... Chegg sent me some press on nails with my book rentals. 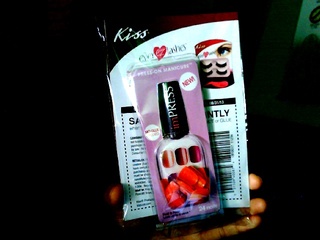 I don't wear press on nails, or even nail polish, so I'm not sure what to do with these.

I would maybe consider wearing them, but they're pink and I don't like pink.

Crane flies
It's weird when you've gone your whole life thinking something is called something and it's actually not that at all.

I grew up calling canker sores cold sores, and vice versa. The internet has educated me as to which is the proper term, but it's something I'm still getting used to.

I've been taking horribly timed naps and staying up far too late, and tonight and last night when I went to brush my teeth in the wee hours of the morning there were giant bugs in the bathroom.

Okay, well not really "giant" ones. But big ones.

Last night there was a big cockroach (by my standards-- I had never seen a cockroach in my house prior to this year) in the bathroom, and after dousing it with Windex and then screaming as it crawled towards me (waking my mom in the process), my mom and I teamed up and she captured that little shit in a jar. It died in there from Windex poisoning, but the point of the jar was to show my dad, because apparently I'm the only one who's been seeing the sudden INFESTATION OF ROACHES IN MY HOUSE. Gotta get this damn place fumigated, jeez. I'm seriously afraid to walk around in the dark because there could be bugs lurking on the floor.

Tonight I went to brush my teeth marginally earlier and right in the middle of my brushing, this huge crane fly came out of freakin' nowhere and started flying around the bathroom. After grabbing the Windex and playing a bit of first person shooter with it, I managed to shoot it down into the sink and watched it twitch until it died. And hey, no screaming this time, though I was certainly muttering panicked obscenities under my breath.

I guess on the plus side, the bathroom is probably cleaner now because I sprayed Windex almost literally everywhere and had to wipe everything down, but at the same time I kind of also sprayed Windex all over the toothbrushes on the counter, so uh, I hope the rinsing I did was thorough enough.

Where was I going with this. Oh yeah, crane flies. I always thought they were called mayflies until just now, when I Googled them. I mean, mayflies still makes more sense to me because these assholes don't start showing up until Spring usually, but I guess I should call them by their proper name to avoid confusion.

Goddamn, I really hate all these bugs. I can still feel my heart pounding.

I guess I'll just snuggle up to my cuddly OX and try to sleep. That might make me feel better.

Oh my god WHAT IS THIS 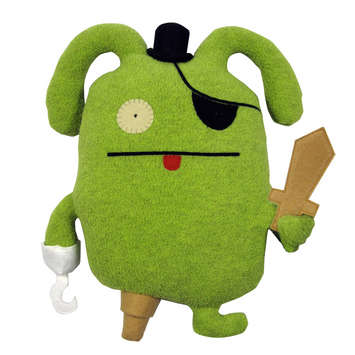 I think it goes without saying that OX is my favorite Ugly Doll but this is ridiculous.

Also I think that the quality of Ugly Dolls has maybe gone down since they started? Or not the quality but like, I dunno, my new cuddly OX has a red fleece tongue and my old OX has a kind of rust-colored felt tongue and while it's not a huge difference, I think the rust felt is better. I still love it, but I can't help but wonder if they're cutting corners or putting more effort into rehashing old characters than coming up with new stuff, etc.

This is cute though. 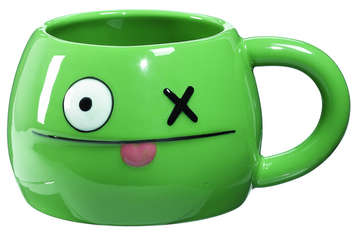 This one is cute until you take it out of hug position... 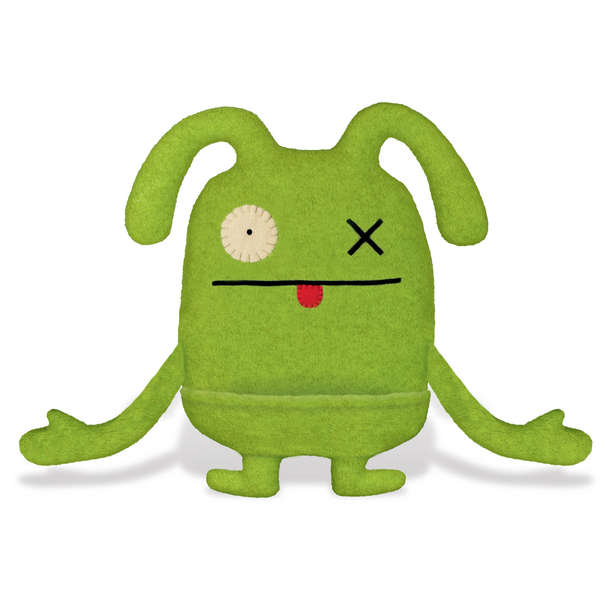