randomjunk's site   weblog   profile   gallery   reading   guestbook
Memores acti prudentes futuri
It's easier to complain
but there is beauty in the mundane
Still going
I keep feeling like my brain has short circuited.

So much time keeps passing somehow. I haven't written back to my penpal in three months, and every day I think I'll do it and then somehow the whole day is gone. Feelsbadman.

"My Best Friend" by Alfie Templeman.


I'm not sure what I'm doing with my time. I've been babysitting again, which is nice, but that's only a few hours a week. Started at the crisis line again too, but again that's not a big time commitment. School is on hold at the moment and I can't go out and do much, so aside from the few obligations I have during the week I mostly just... sleep, I guess. It's often more interesting to dream than it is to be awake.

It never feels like I have enough to say to write a blog post anymore. I want to write but nothing comes. Can't even write about my feelings because I don't feel much most of the time.

Tonight I listened to "Just Like Heaven" by The Cure on repeat though and I did feel something. It was a sort of beautiful sadness, deep, tender, painful, alive. It was like the old sadnesses I used to have. The ones that you are grateful for because they remind you that you can feel, that this is what feeling is. I miss feeling things deeply. So much badness in the world and the news, and I try not to absorb it but it still gets to me, and I'm burnt out on it. I've emotionally shut down to some extent to protect myself-- not intentionally, but against my wishes. It's all too much.

Nothing has ever been perfect or fully okay, but I feel less able to carve out some small space for myself to appreciate beauty and life now than before. It's a privileged position I guess, to have had the experience of life without inescapable awareness of injustice and immorality. I don't know that I've ever tried to ignore things though... Before it just felt like I had a choice on what to focus on, and I could put more weight on things that might lift me up. Now it's like the bad parts constantly intrude on my inner world and there's no respite.

Maybe we're all feeling this way though. The pandemic and politics have been burning out a lot of people.

I remember a clip from a movie-- some Japanese film I think-- where a mother is preparing food for her family. She has some kind of condition where she can't sleep or she'll die, so her family is trying to keep her busy so she'll stay awake. They plead for her to cook for them, and she finally finishes preparing the meal and then collapses. I have no idea what the context of that scene was but something about it resonates with me.


Budgie fat camp
I took my birds to the vet today. It's a contactless operation now, so the vet called me on my phone to discuss what they found.

"You are the proud owner of a morbidly obese budgie," she told me.

This was not truly a surprise, as I had noticed that one of my birds was indeed quite a lot heavier than the other. He just loves eating, and thanks to frequent treat offerings from my brother he has swelled up to a hefty 58 grams. That's nearly twice the weight of my other budgie, who at last weigh-in was somewhere in the 30s range.

The vet was quite colorful in describing how fat my budgie is.

"He's so fat that he's got a layer of fat making it difficult for him to poop, and he's so fat that he can't reach around and clean himself. He's probably had poop stuck down near his vent, what we call a butt plug. If he gets much fatter his legs and back won't work and he'll have to scoot around with his belly on a skateboard."

As hilarious and horrifying as this report was, the light at the end of the tunnel was that we just need to get him to lose some weight and he should be okay. The vet offered to put him through budgie fat camp for a week and I agreed. I was worried it would be thousands of dollars but it was actually under $600, which felt quite reasonable in comparison. Anyway, this is my brother's favorite budgie (and it's also his fault that the budgie is so fat), so he can foot the bill.

Drink pie
I've been making pie smoothies the past couple days. Not like, making pie into smoothies, but making pie-flavored smoothies. Still experimenting with the ingredients, but the one I made just now came out pretty good.

This is not a great picture for several reasons, but you get the idea: 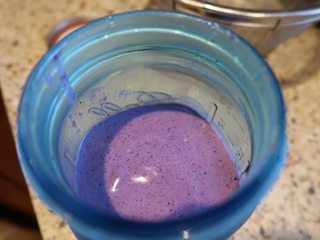 The vinegar really gave it the "juicy" quality I was looking for. I thought the tartness from the lime juice would help but... eh, it didn't do much. No measurements because I didn't measure anything.

I've been having trouble eating recently, so having something easy/nutritious like this is good.


Swabbing
I decided to go get tested for COVID-19 on Wednesday. The testing site I went to opened at 10 AM, but my dad advised me to get there at 9 because the line would likely be long. I got there a little after 9 and the line grew to probably twice the size by the time 10 AM rolled around. All in all I ended up waiting about two and a half hours to get swabbed.

Having seen some of the videos and pictures online of swabbing, I was slightly nervous about how it would feel, but actually it wasn't bad at all. They didn't jam the swab up my nose and poke my brain or anything.

Got the results yesterday, which was sooner than expected. Thankfully I'm in the clear-- no virus for me. Now I can go back to just being paranoid that other people have it.

---
"Some Things Cosmic" by Angel Olsen.

If cosmic force
Is real at all
It's come between you and I...